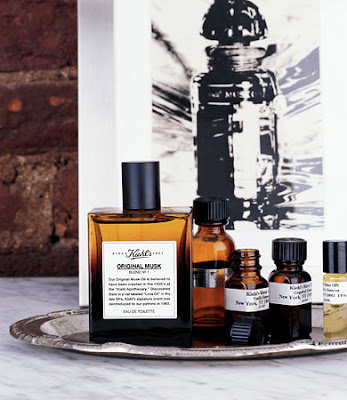 This month’s exciting new fragrance launch from Kiehl’s Since 1851 is their Portable Essence Oils. This new fragrance concept for Kiehl’s digs deep into their 158-year-old history to re-introduce essences that were formulated in the original Kiehl’s pharmacy in New York ’s East Village decades ago. These are vintage fragrances with a modern twist, and like all Kiehl’s products, are appropriate for men and women--they’d be ideal Valentine’s Day gifts to give or get, for the ladies and gents.
When the original Kiehl’s Pharmacy was founded in 1851, it quickly developed a reputation for supplying New York’s eclectic citizenry with some of the most inspired fragrant blends, among them Money Drawing Oil, Attraction Oil, and Purity Oil. Customers of the East Village neighborhood apothecary sought after these uniquely customized fragrances – adopting the belief that their personal essences were capable of bringing luck or enhancing charisma.
In fact, the original Kiehl’s Pharmacy developed a reputation among New York ’s eclectic downtown crowd for some of the most original scents of the day. Many of Kiehl’s essences have been beloved by customers, staff – even fans – the world over, and the New York apothecary is delighted to re-introduce these most popular essences collected over the years. These “cult classics” are shrouded in myth surrounding its origins. Kiehl’s lore has it that Musk – the first essence oil created and still most beloved by customers – was formulated in the early 1920s by a relative of Kiehl’s founding family, an actual Russian prince! The legend of Kiehl’s Original Musk Oil says that the formulation was deemed “too sensual” for the times and was stashed away in a vat labeled “Love Potion” in the basement – in the deep, dark recesses of the Kiehl’s Pharmacy at 109 Third Avenue in New York City. The vat was not opened again until 1958, at which time a store renovation took place, and was finally introduced to Kiehl’s customers for the first time in 1963. 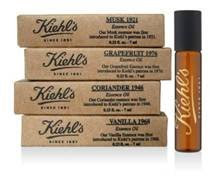 Because of the popularity and richness of the Original Musk Oil, customers over the years created many personal blends around Musk, with essences as varied as Cucumber, Grapefruit and Vanilla. Vanilla was also a favorite base for blends, and creations using Vanilla with Grapefruit, Coriander, and Amber provided unique fragrant effects on the skin.

About the turn of the last century, Kiehl’s was concocting many different essences – 122 to be exact – that were blended by hand in front of customers. In addition to the initial launch of Musk, Coriander, Vanilla and Grapefruit, Kiehl’s will also offer six more fragrances in the coming months. The following details the first four essences and their place in Kiehl’s fragrant history:

MUSK 1921
This is Kiehl’s first essence oil and still today, most beloved by customers who often refer to it as the Original Love Oil. The use of musk dates back more than 1,300 years when it was used by rulers of early Chinese dynasties for its herbal medicinal properties. Until the late 19th century, the natural musk was used extensively in perfumery until economic and ethical reasons motivated the adoption of synthetic musk, which are used almost exclusively today.

CORIANDER 1946
Coriander was first used at the original Kiehl’s Pharmacy as medicinal oil for its soothing and healing properties. This aromatic stimulant and spice has been cultivated for over 3,000 years and used by the Egyptians as an aphrodisiac. Known as cilantro or Chinese parsley, Coriander is considered both an herb and a spice, since both its leaves and seeds are used as a seasoning condiment.

VANILLA 1968
Many Kiehl’s customers have shared their layering suggestions over the years, but an overwhelming majority mix Vanilla with Musk. Originally cultivated by Pre-Colombian Mesoamerican peoples, Spanish conquistador Hernan Cortes is credited with introducing both the vanilla spice and chocolate to Europe in the 1520s. The Spanish and Portuguese sailors and explorers brought vanilla into Africa and Asia in the 16th century. 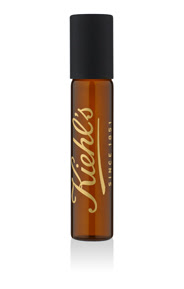 GRAPEFRUIT 1976
A customer favorite for decades, Grapefruit delights Kiehl’s customers with its fresh and citrusy scent. Grapefruit was first described on Barbados in 1750 and was also called the forbidden fruit because it was seized upon by those searching for the identity of the original tree of good and evil in the Garden of Eden.